Leslie Watson grew up in eastern Texas, and Hazel Tunstead grew up in northern New Jersey. When the U. S. 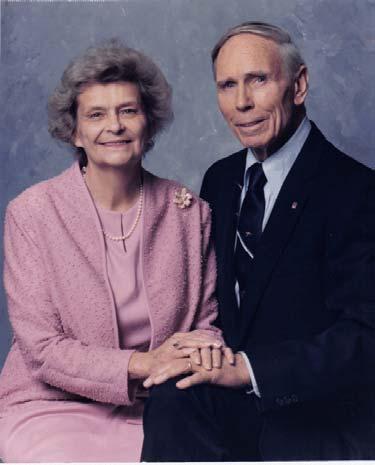 entered World War II, Leslie joined the Marine Corps. Hazel volunteered for service as a Navy WAVE. They met at the Quantico Marine Corps base in Virginia. As the war ended Leslie felt a call to minister among the Japanese. They married and pursued further education. The Southern Baptist Foreign Mission Board appointed Leslie and Hazel Watson in 1950 and sent them to the Japanese city of Miyazaki on the island of Kyushu.

Leslie and Hazel served in Japan for 32 years. Then the mission board asked them to serve at the Missionary Learning Center in Rockville, Virginia. They ministered there for four years, helping train and prepare new missionaries to serve Christ effectively in unfamiliar cultures, and attending Berea Baptist Church.

When Leslie and Hazel retired from missionary service, they remained in the area. They moved to Biltmore Baptist Church in 1988. Leslie volunteered his services to Dover Baptist Association as Missions Development Associate. He visited Dover churches, encouraging local and regional mission activities. Hazel focused her attention on helping WMU groups.

Three years later Leslie developed terminal cancer. Dr. Keith Parks, then president of the Mission Board, visited Leslie at the hospital. It turned out to be the last week Leslie lived on this earth. During the visit, Leslie removed his wedding ring and handed it to Dr. Parks. Leslie told Dr. Parks he wanted the ring sold and the money given to the Lottie Moon Christmas Offering for International Missions. Humbled by such a gesture, Dr. Parks accepted the gift. Dr. Parks told that story to the staff of the Mission Board in their chapel service the next day. Those present contributed to an impromptu offering to redeem the ring. They contributed more than twelve times the value of the ring, gave the money for missions, and returned the ring to Hazel.

Hazel continued serving our Lord by being a friend and witness to many people. She served as Biltmore’s WMU Director, as a deacon, and as an encourager. An article about Hazel that appeared in the church newsletter said, “Hazel may best be known, however, as a mighty prayer warrior. Her gentle spirit and loving attitude are an example of a life centered on God, and Biltmore is fortunate to count Hazel as one of our church family.”

Hazel shared her talents with Dover Baptists through the association’s Discipleship Training Committee, Missions Awareness Committee, and through its Prayer Council which she led. Dover WMU recognized and shared Hazel’s love for missions and people, appointing her its Missionary-in-Residence.

Hazel’s family planned to celebrate her ninetieth birthday on January 4, 2009. Following her death on December 28, 2008, the family transformed that event into a celebration of her life and ministry. Leslie and Hazel’s remains were buried in the National Cemetery at Quantico, Virginia.

A friend said, “Whenever either of these two walked into a room, that room would be flooded with a warm, holy light.” Dover Baptists thank God for their ministry and lifelong witness, including their time among us. In 2010, Dover Baptist Association added the names of Leslie and Hazel Watson to its annual offering for association missions. May their example inspire Dover Baptists and others for generations to come!